Their article is a Nature Magazine Preprint. That means it has not yet been published in Nature, and has not yet been through Peer Review. However, if you have a degree of scientific understanding you will be well able to reach your own conclusion. A pdf download of the full article is available at the bottom of this page, together with its web link. What follows is a slightly edited version with my clarifications in blue, which I trust is more readily understandable for non-scientists. Note that the article the two Professors deconstruct is a major bulwark of the lockdown lie, in which both Prof Ferguson and Imperial College were deeply involved. The German Professors are Stefan Homburg and Christof Kuhbandner.

In a recent article, Flaxman et al allege that Non-Pharmaceutical Interventions, such as lockdowns, imposed by eleven European countries, saved millions of lives. Flaxman et al is a fairly standard style of nomenclature for a scientific paper. It simply means the main author was Flaxman and others worked with him. The original paper lists who the others were.

We show that their methods involve circular reasoning. The purported effects are pure artefacts, which contradict the data. Scientists using circular reasoning is disastrously negligent. Artefacts are things made by humans. Simply, Flaxman and his chums made stuff up which was proved wrong even by the data they themselves used. Moreover, we demonstrate that the United Kingdom’s lockdown was both superfluous and ineffective.

A key concept in epidemiology is the Effective Reproduction Number, R(t), where t denotes time. This function represents the expected number of infections generated by one infected individual. Other things being equal, the Effective Reproduction Number starts at R(0), referred to as the Basic Reproduction Number, and then consistently decreases without ever increasing again. The steady decrease is due to the fact that the number of individuals susceptible to the infection but not yet infected declines as the virus spreads. This is just a synopsis of basic epidemiology. If it is not clear to you, read Epidemiology for Dummies, here, or read it a second time!

Of course, the function R(t) can be influenced by Non-Pharmaceutical Interventions (NPIs) as well as by voluntary behavioural changes. An NPI is something, such as social distancing or staying at home, which theoretically reduces transmission of the virus, resulting in a lower Effective Reproduction Number. However, in case of a finite population, the Effective Reproduction Number falls automatically and necessarily over time. In the context of a human epidemic, populations are effectively finite. This is a further restatement of a fundamental in epidemiology.

The model of Flaxman et al contradicts this elementary insight. Simply, they are ignoring the basics of science. They estimate R(t) from daily deaths associated with Covid-19 using as an a priori restriction that R(t) may only change at those dates where interventions become effective. An a priori is an assumption that is made without evidence. Wikipedia defines an a priori assumption as something you don’t even need to get out of bed to prove. It should be blindingly obvious. But Flaxman and friends have assumed that R(t) does not go down naturally. They assume it only goes down as a result of an NPI. They are making an assumption that is blindingly, obviously wrong.

Such an approach does not prove that NPIs were effective but rather preempts the result; that is, it involves circular logic. The true Effective Reproduction Number declines continuously, and when its estimates are assumed to change only because of NPIs, it is inevitable that profound discontinuities, which attribute strong effects to the interventions, will emerge. In other words, the Effective Reproduction Number will be made to look as though it goes down in bumps rather than gradually. Flaxman et al, on Page 2 of their paper, conclude that while most NPIs had unidentifiable effects, lockdowns reduced the reproduction numbers instantaneously by 82%. In other words, even though their data did not show identifiable impacts on R(t), they make the bizarre assumption of a sudden 82% decrease due to lockdown. 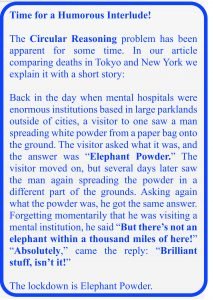 Back to the Article:

Taking the United Kingdom as an example, Figure 1 illustrates the ineffectiveness of social distancing, etc, according to Flaxman et al, as well as the allegedly enormous effect of the lockdown from 23 March.

Figure 1 warrants some special explanation. When I first saw it I thought I was seeing some kind of scientific diagram that I was quite unfamiliar with. Had the science suddenly gone way above my head? Eventually I realised it is just a graph; my problem in understanding was that it is so intimidatingly execrable. I’ve added some labels to make it clearer. 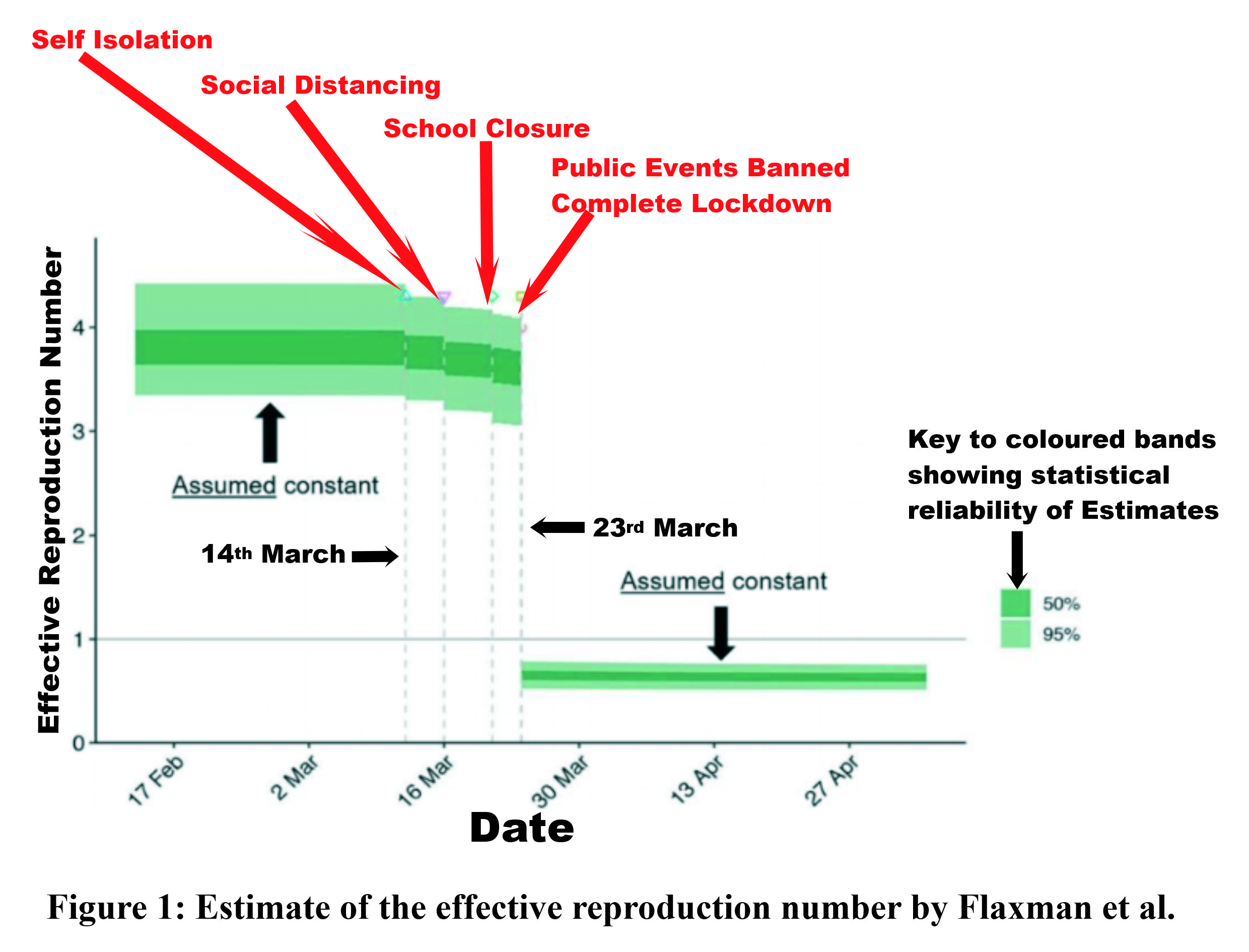 Flaxman et al assumed R(t) constant before 14 March and after 23 March. They only allowed changes on the four dates when NPIs became effective. This is totally contrary to the basic teachings of Epidemiology. The Effective Reproduction Number does not remain constant. The assumption that it does is absurd, and the assumption that it drops like a stone due to lockdown is exactly that: an assumption. The bands showing Statistical Reliability cleverly give an impression that this graph actually has some reliability. It has none.

Flaxman et al, on Page 2 of their paper, infer their estimate of the Basic Reproduction Number from the initial growth of reported daily deaths. Our Fig. 2 shows the actual growth of reported daily deaths. Following the presumption of Flaxman et al that deaths are more reliable than cases, we see growth of reported daily deaths as a good empirical proxy that mirrors the development of the Effective Reproduction Rate. The other way to track the epidemic is testing, but the reliability of tests is questionable, and the number of tests carried out has risen dramatically over time. This makes deaths a more reliable way of tracking the epidemic, used by Flaxman et al and also accepted by the German Professors. Of course, deaths follow infections after a long delay – a fact which is taken into account below. 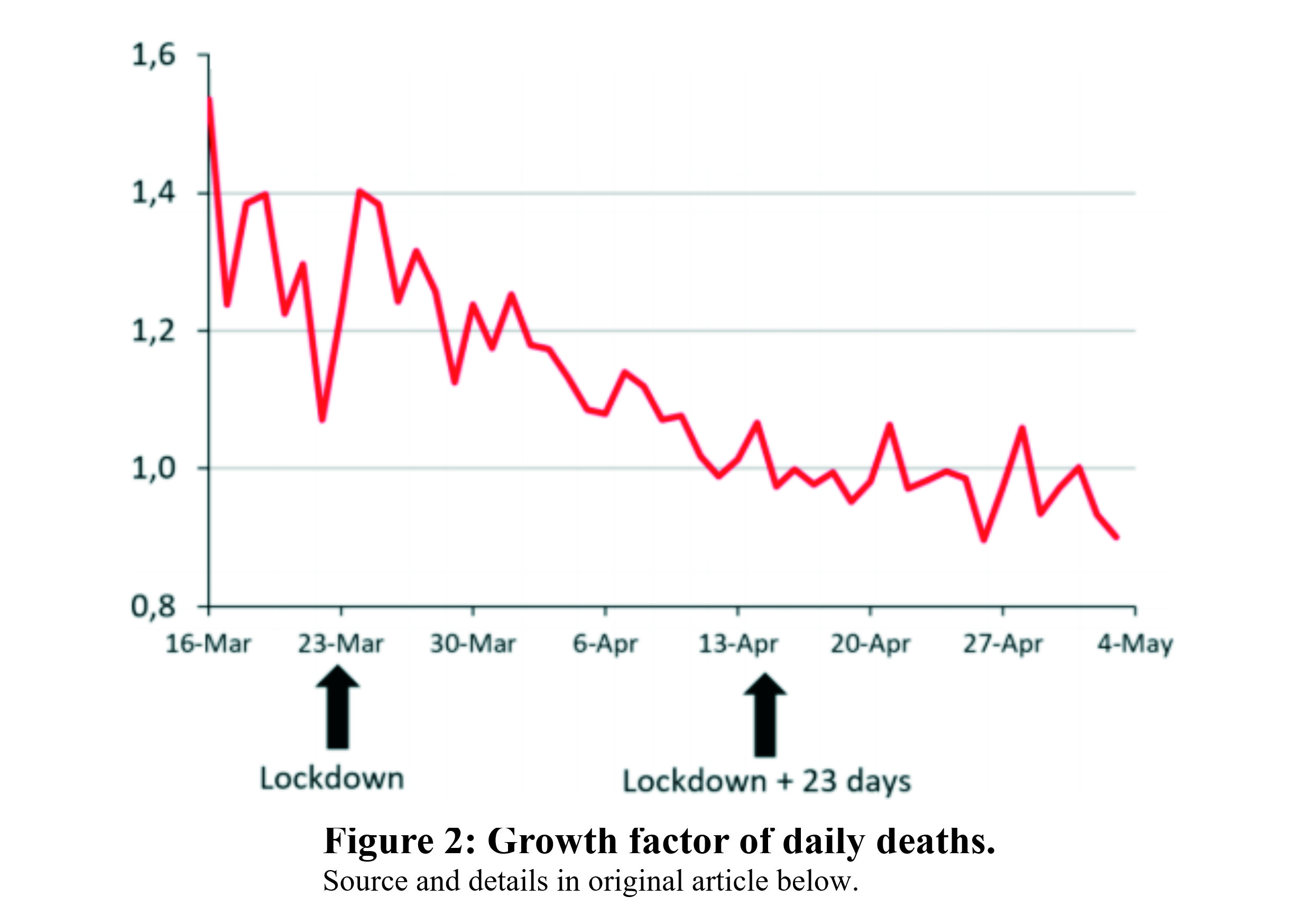 Disregarding noise in the data, the daily deaths associated with the Coronavirus declined steadily during March and April. “Noise” here refers to uncertainties over cause of death, reporting delays, natural variation, etc. Moreover, reported daily deaths follow infections with a median delay of 23 days, consisting of a 5 day incubation period and a median delay of about 18 days from symptom onset to death. Note that this delay also underlies the estimations by Flaxman et al. (page 22 of their supplementary information.)

Considering a total delay of 23 days between infection and death, possible effects of the 23rd March lockdown should only become visible in the data around 15th April. However, the series does not show the slightest break in mid-April. Up to that time, the R(t) had already declined from 1.54 to 0.97, and thereafter it continued to fall. Contrary to the findings of Flaxman et al, Fig. 2 strongly suggests that the UK lockdown was both superfluous (it did not prevent an otherwise explosive behaviour of the spread of the Coronavirus) and ineffective (it did not slow down the death growth rate visibly).

The argument of a delay of 23 days between infection and death can also be used going further back in time. With the growth rate of daily Corona deaths falling since mid March, the underlying Effective Reproduction Number must have started declining in the second half of February. This is long before the problem was recognised or any measures were taken. The continuous decrease in R(t) in Fig. 2, even at dates before any NPI could have become effective, corroborates the theoretical insight that R(t) falls automatically over time. We have checked that the Effective Reproduction Numbers in the remaining ten countries considered by Flaxman et al show a similar pattern.

Our final remarks regard Sweden. It is the only country in the dataset that refrained from strong measures, but has lower corona deaths per capita than Belgium, Italy, Spain, or the United Kingdom. In the absence of a lockdown, but with an Effective Reproduction Number that declined in the usual fashion, Flaxman et al attribute the sudden decline in Sweden’s R(t) on March 27 almost entirely to banning of public events; that is, to a NPI that they themselves found ineffective in all other countries. This inconsistency underlines our contention that the results of Flaxman et al are artefacts of an inappropriate model. Artefacts are things made, or made up, by humans. Hence, in simple terms, the Professors conclude that the results of Flaxman et al are made up assertions based on a garbage model.

The deeply disturbing conclusion of Professors Homburg and Kuhbandner is, as they plainly state, that the lockdown was both superfluous and ineffective. Their conclusion is backed both by the basics of epidemiology and also by the specific data. A raft of evidence was already pointing to this. Now, the German Professors have dismembered the Lie of Lockdown with unprecedented concision and clarity.

I believe the two German Professors who debunked lockdown were not Epidemiologists. Should I trust them or Prof Ferguson?

Prof Ferguson was trained in Physics, not Epidemiology, so none of them are Epidemiologists. One of them does actually have a long track record in Epidemiology, albeit one of  catastrophic, crazy, overblown epidemic predictions. Follow the science, not the man.

The original Flaxman et al article in Nature Magazine is here. Interesting raft of negative comments from other scientists appended to it.

The German Professors’ article is here on the web, or download pdf from this site below.