This question goes way back to 20th April. The FT were quoting an anonymous Minister, who said that a paper produced by a Cabinet Subcommittee “suggested that the level of avoidable deaths could be as high as 150,000.” Matt Hancock, the Health Secretary, replied that it was “not part of our internal analysis”, and added, “when we do that analysis and we have confidence in it, then I’m sure we’ll be able to answer it more correctly”. The Mail had already referred to this figure ten days earlier, quoting specific lockdown-related murder and suicide. (FT article here, Mail article here.) A Google search for a better Government answer as of 13th May reveals nothing. So four weeks on there is still no answer to the “avoidable deaths” figure except that 150,000. In the absence of a Government denial, it is fair to assume that the number of lockdown-caused deaths will indeed be in that range. It puts a different slant on the 30,000 deaths from Covid19 so far reported.

If the Government is telling us nothing, we need to do our own investigation. On the question of suicides, the University of Sydney’s Brain and Mind Centre has a distressing prediction for Australia. (here.)They talk of an “additional 1,500 suicide-related deaths every year over the next five years.” The spread over five years is a shock. I’m not a psychologist, but I do know that the effects of Post Traumatic Stress Disorder (PTSD) are long lasting, and I’m happy to bow to their professional assessment here. What they are talking about is a 50% increase in Australian suicides in each of the next five years. In the UK that would equate to an extra 15,000 deaths (6,000 annual suicides, times 50%, times 5 years.) That is already ten percent of the 150,000 figure. And we are not talking about 80-year-olds dying in Care Homes here; we are talking about young people in the prime of their lives.

There is, of course, a far bigger and more obvious cause of extra deaths. When Ministers make their announcements they stand behind podiums saying “Protect the NHS.” That, of course, is precisely what they have failed to do over many, many years. Now their twisted version of “Protection” is to throw the NHS into a car crash in which most people cannot get treatment. And that in spite of record numbers of empty beds, as reported by Health Service Journal here. Whether it’s cancer, heart problems, diabetes, liver problems or a host of other serious and often fatal illnesses, people are left without hospital treatment. It is redundant to state that in normal circumstances the NHS saves lives. When it mostly closes its doors, obviously more people will die. In short, the Government has failed to “Protect the NHS and Save Lives.” Now we are protecting it. By dying.

The connection between mortality and poverty is well known. Increasing numbers of commentators are talking of the Lockdown Economic Crash being on a par with the 1930’s Depression. Hence, it’s not difficult to imagine why the Government has not published a revision to the 150,000 number as Matt Hancock promised they would. The reason is likely that the refined number goes higher than 150,000.

In this context, it’s worth looking at the latest Worldometer.info graphs to see what the lockdown is currently protecting us from. Daily deaths looks like this as at 13th May: 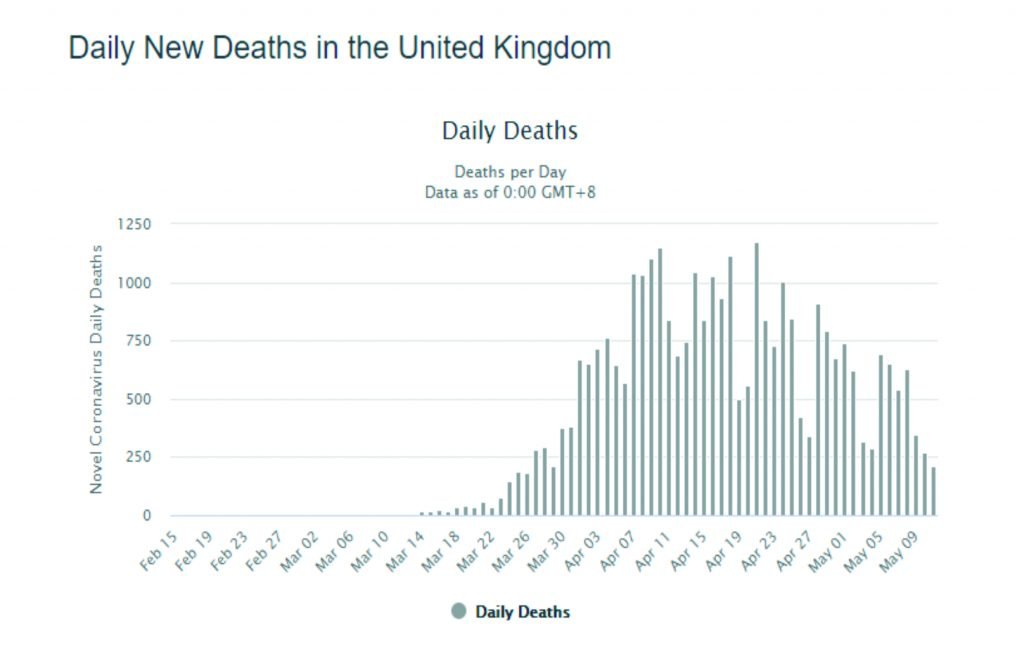 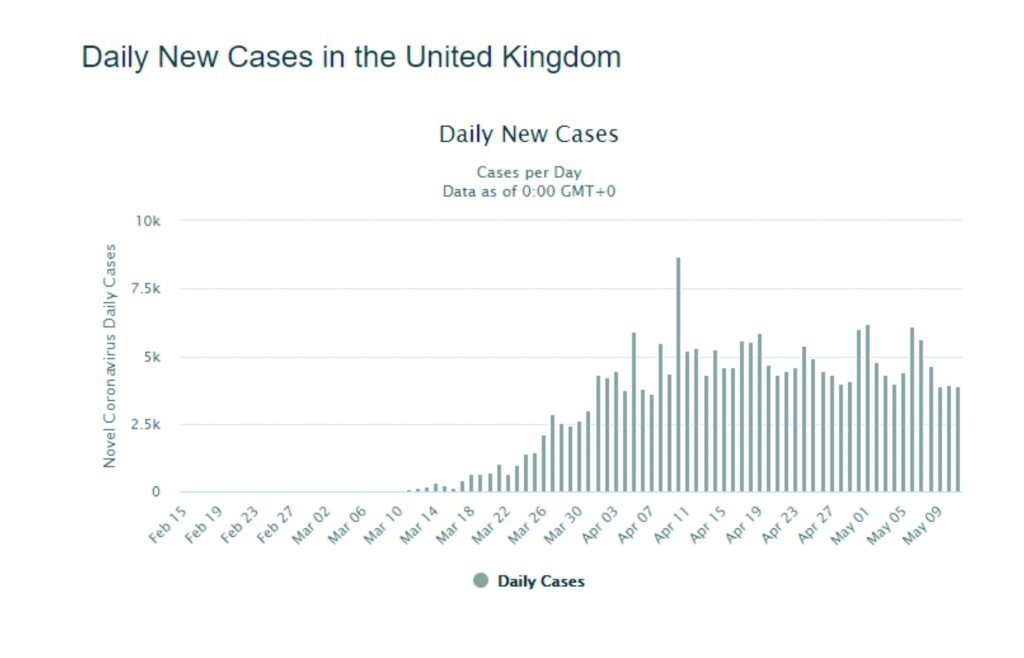 If you’ve been reading the Epidemiology for Dummies article you’ll know that in any epidemic we expect to see something like a Normal Distribution Curve for both cases and fatalities. It’s the red line on this SIR Model graph. (Check the article here if you are not familiar.) 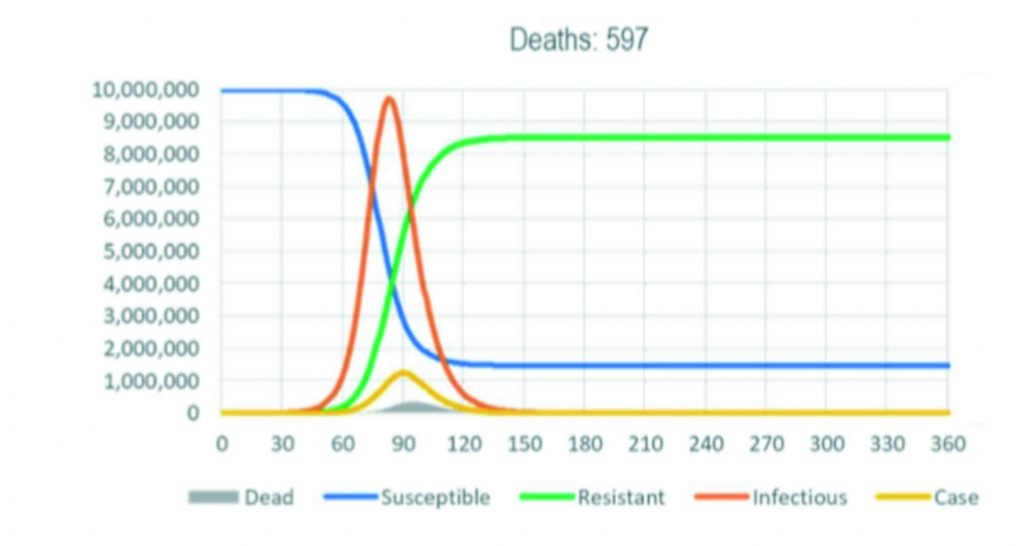 The red line, showing infected people, has a very sharp peak. This is what we would expect from an uncontrolled epidemic of any Covid-like illness. This is the curve that the Government has constantly talked about “flattening,” in order that the NHS would not be overwhelmed. But the NHS Nightingale Hospitals have had almost no patients, and are now already closed. The first, in London, opened some six weeks ago. Why was the lockdown not eased then? That would have used the extra capacity, got people back to work, and got the epidemic over faster. The Government are not following their own logic.

It gets worse. Many scientists, including Sweden’s Prof. “No Lockdown” Giesecke, state that “flattening the curve” probably doesn’t save lives; it only spreads out the deaths over a longer period. So, let’s say the ultimate Covid toll is 50,000, with 30,000 having already died. As we will see shortly, that is a pessimistic figure. But just suppose. And compare 50,000 Covid deaths to 150,000 (or more) lockdown-caused deaths. Is there any sense in this at all?

Those first two graphs above both potentially give an indication of what lies ahead. But there is a great inconsistency between them. If we look at the Deaths Graph, it is not difficult to imagine a Normal Distribution Curve drawn on it. Such a curve has a peak around 17th April, when we were experiencing about 1,000 deaths per day. Since there is obviously a time lag between someone becoming a confirmed case and actually dying, we should see a similar curve on the Cases Graph, but with the peak perhaps two weeks earlier, say 3rd April. But there is no sign of a peak there. In fact, there is no sign of a peak at all. Any attempt to make a smooth line through the data on the Cases Graph comes up with an almost flat, straight line, just below the 5,000 cases mark, running from the beginning of April to the present. If we extrapolated such a line, we would conclude that the epidemic will go on indefinitely. That seems to be what the Government would have us believe. But epidemics don’t do that.

One of these graphs must be wrong. What is the explanation? If we trust the Deaths Graph, as the Government would have us do, and which I am prepared to do, then the Cases Chart is wrong. How could that be? Well, quite simply, the Government has been boasting about its increasing testing. More testing means more Confirmed Cases, which is what that Graph is showing. We simply have no data on Actual Cases, which is what we really want to know. That graph is indeed showing Confirmed Cases, but it is not a guide to the prevalence of Actual cases. Hence the more reliable graph is the Deaths one.

So what then of the future? The Deaths Graph shows a classic “end of epidemic” situation. Deaths yesterday were about two hundred, only one fifth of the peak figure. If the NHS survived the peak deaths without collapsing, and without using all those thousands of emergency Nightingale beds, it certainly won’t collapse now. “What about the Second Wave?” I hear you ask. Not a problem. Any alleged Second Wave cannot be nearly as bad as the First, since there is now a substantial amount of herd immunity. And let us be clear about herd immunity. It is not some insulting, careless phrase dreamed up by the media, which treats people as a herd of animals, and expects mass deaths. It is an epidemiological concept. Again, it helps if you have read Epidemiology for Dummies here. If you have, here’s a little revision. Herd immunity is what stops epidemics. It matters not whether that immunity comes from vaccination or through contact with the infection, which is normally not serious or, indeed, not even noticed. The level of herd immunity needed varies with different diseases, depending on their R0 number (pronounced R-nought.) Measles has a high R0 of 15, so to prevent serious spread about 95% of the population need to be immune. Covid19 probably has a basic R0 of around 2.2, which means it is likely that herd immunity is reached with some 60% to 70% being immune. We do not know the current immunity level, since the Government has been very slow to do antibody testing; the testing being done now is mainly PCR testing, which does not tell us about immunity. In any case, there are big questions over the reliability of all these tests. I asked Dr Wittkowski in a recent phone call what his guess was of the current UK immunity level. Wittkowski has decades of experience working in Epidemiology, including working with Prof Klaus Dietz in Germany. Dietz is the man who coined the term R0, so he is one of the Fathers of Modern Epidemiology. Dr Wittkowski’s “best guess” was that current immunity in the UK was approaching 30%. I’d believe him over Matt Hancock or the disgraced Prof. Lockdown Ferguson any day. And if we are already about halfway to full herd immunity, no Second Wave can be nearly as bad as what we have seen so far. And with daily deaths now down to the low hundreds whatever we do now, it’s time to end the lockdown and start saving some of those 150,000+ lockdown deaths that the Government doesn’t want to talk about.

It’s is also worth stating that there are huge doubts over whether lockdown even works very well for this virus. Not only the comparison between the UK and Sweden here, but also the stunning comparison between New York and Tokyo here, are relevant.

Final Note. As stated above, herd immunity can come about through contact or vaccination. It will come quite soon by contact. It may never come through vaccination. Vaccines for Coronaviruses are a massive challenge. The Common Cold is frequently caused by one of a number of Coronaviruses. Any vaccine for that yet? And even if a properly tested, safe vaccine were available in eighteen months, who wants lockdown for that long? The Government’s original policy was to go for herd immunity. It’s actually the only policy that makes sense.